"Drumming Consciously to Tune Yourself to Higher Will"

"Drumming class #36 is revealed in the most magical way. If you see what E.J. Gold is doing, notice the transitions and listen to what he's saying, it's obvious that he not only talks about weaving in and out of realities, he takes the class through with him whether you're paying attention or not. I'm glad it's on DVD to witness." -- MK, California

The DVDs from the previous three weeks were shown. You can call them healing rhythms, but actually you're learning invocational rhythms, patterns vibrating the gelatinous atmosphere. Drumming is the act of aggressing upon the atmosphere in such a way that it changes the way the atmosphere is behaving. What happens is that the interpretation of reality changes for the body, and eventually, by contamination, the rest of the Essential Self folds in, goes under the influence at some point.

The big secret is nobody has the "will to work". The way you get the will to work is to attach yourself to a higher will. E.J. revealed that there are some safe higher wills he can "sign for", and he doesn't give his signature casually. They are addressed by their vibration, their frequency, their "telephone" number, their name, their very Being.

A drum doesn't have to be a drum with a skin. It can be as simple as your own thighs. E.J. drummed on his thighs explaining the various things he was doing to create numerous sounds. Drumming is a new balance in the atmosphere. You're setting up a pattern of dominant waves that, when done with care and knowledge, comes out as a prayer, an invocation or a chant. You're stirring up the atmosphere into a rather amorphous shape determined by a variety of factors which E.J. identified. You're creating this pulsating thing that you can think of as a blob.

When you're building a vortex, you're changing the gelatinous atmosphere in some way that changes its frequency, its elevation, its mode of existence. It changes it into something it already is. You're tuning into that particular modality of its existence. You're not altering anything, you're tuning yourself into reality, to where it's happening. You want exactitude for this.

If you use drumming consciously you'll want to tune yourself to companions that will help you, and if they feed off you, it will be very reciprocal. E.J. began drumming to show a way to pacify the atmosphere which gives you a peaceful space. Keep in mind that E.J. is using the enhancement of the P.A. system with the Tri head udu. Watch the atmosphere as you drum, and eventually, you'll be able to observe it start to throb. This drumming pattern will carry you into a space of inner silence. It disallows the associative, calculating, analytical brain to work. It clears the atmosphere, the space, the mind, giving yourself some space to exist as an immortal being. It will be made available as a 1 hour loop. 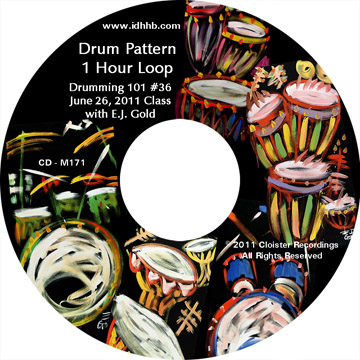