After a while, we stopped playing Zelda I for the most part, and began getting into First Person Action Shooters... ROTT, Wolfenstein and World-Maker, which gave me the opportunity to experiment with level design. 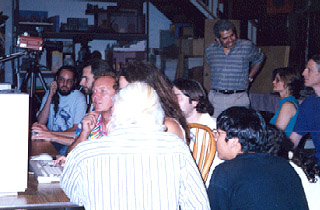 Then along came DOOM and ROTT -- Rise of the Triad -- and Duke Nukem...they were all right, but then came Quake, and its online capabilities.

I immediately got an editor -- WorldCraft -- and began making maps. My friends at ID, American McGee and Todd Hollingshead, were very helpful in this first attempt at level design. I wasn't interested in straight killing, so when CTF -- Capture the Flag -- came along, I dove right into it, making several levels that became useful to the gaming community. 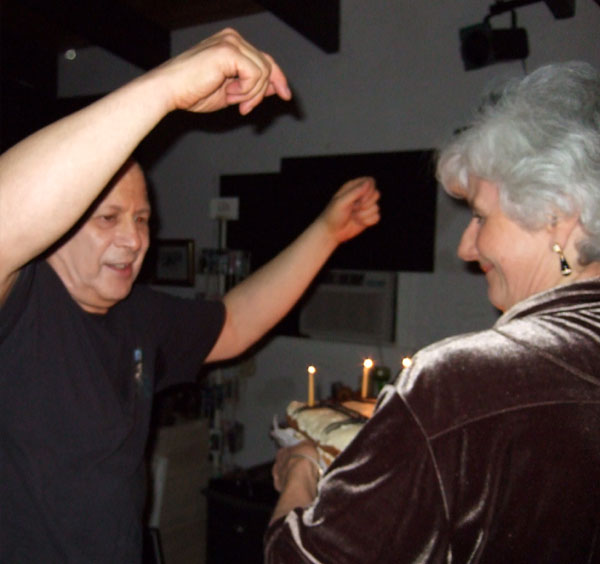 Soon after that, along came Team Fortress, a Quake MOD...and Xxaxx and I were full-jets on making levels for TF, several of which enjoyed thousands of downloads and were used by the TF community for several years.

At this time, I put up Gorebagg's Slaygrounds -- we had six servers running at the height of TF.

These days, with the advent of TF2 and all its great maps, I content myself with just playing. Running a server with all its admin horrors and anti-cheat concerns, is just not my cup of tea. 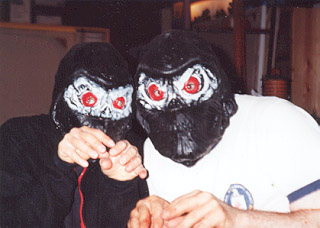 Real Life Situations Such As This One ... 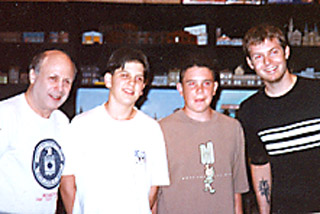 (L to R) CNBC Cameraman, Gorebagg, Jimmi Accardi, Menlo Macfarlane and David Christie at live broadcast of CNBC's Squawkbox for its 4th Anniversary show, for which they were joined by Bob Bachtold and R.C. Trice

Amongst all the TF2 servers, I prefer to play in servers that are mature, fun-loving and friendly -- notably Gamers Underground servers out of Adelaide, South Australia, JOLT, and a very few others.

Gorebagg spends much of his free time in online videogames, Team Fortress 2 and Diablo II as a relief from high-intensity level writing, model design and game storyboarding in the GODD(tm) Engine.

They also appeared on the TV show, Squawk Box, performing hits from their Wall Street album for the show's 4th anniversary.

Click here for the long form of Gorebagg's Biography