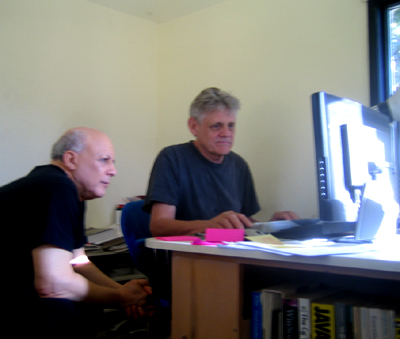 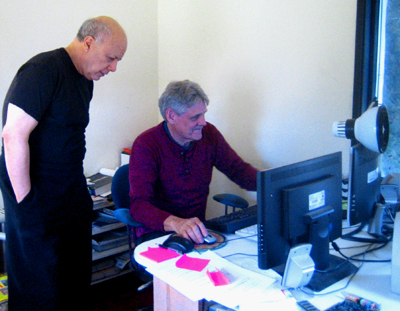 Gorebagg and Val workin' on the next game

Gorebagg has been involved in game design since... basically forever. In the 1960 and early 1970s Gorebagg was involved in a process of continual enhancement of his privately published games "Conjure" and "Bardotown".

In the mid 1970s when Arneson & Gygax published their first Dungeons & Dragons adventure. At the request of several friends and gamers, Gorebagg refactored several levels from his popular Conjure desktop game into the the D&D environment.

With the advent of personal computers in 1980 (starting for Gorebagg with an early version of the Altaire) Zork (then later Hitch Hiker's Guide To The Galaxy) hit the cyber streets. These text games by InfoCom were based on the Z-Engine -- very well implemented. However, since there wasn't a publically available editor at the time, Gorebagg asked his friend Val if they could colaborate on a similar engine. Since Val's early days at MIT he has had a special love for all things involving text parsing and list handling. So the two of them put together a virtual operating system designed to interpret and run text-based games. These adventures held Gorebagg's game development interest until the advent of the Amiga a few years later (1985-1987 depending upon which model you are talking about.)

Hoppy The Bunny (working title only) was developed into a full video game before Commodore dropped the bomb and filed for bankruptcy. Rather annoying. Many of the gaming effects and even some of the grahics have found their way from Hoppy into the GODD environment. Still it would have been nice to see a release of Hoppy. The standard computer hardware aside from Amiga did not have the functionality required for the game's core features to run, so development was shelved until capiblities of commonly available hardware caught up.

Gorebagg's next excursion into video game development came with Wolfenstein. Wolfenstein was one of the first first person type games. Using a level designer it was possible to create new levels that would run in the Wolfenstein engine. Gorebagg created dozens and dozens of amazing levels. Friends and friends of friends were fortunate enough to receive weekly (and sometimes daily) updates of these game levels.

When the R.O.T.T. (Rise of the Triad) game (and level editor) came along, Gorebagg shifted completely from Wolfenstein to ROTT development. The rich array of resources and game function gave Gorebagg an expanded palette to develop his levels in.

Shortly there after Quake, CTF, and the mod Team Fortress came along, giving rise to a whole new era of level development. Gorebagg continued development of TF levels until ID inadvertently killed TF by releasing source code for the core engine. Hackers and griefers used the code to make it unreasonably difficult for the online community. So it just dwindled to near zero. (Still a few die-hards carrying on the tradition, though.)

After the death of TF, Gorebagg has turned his full game development attention to GODD Games. There are several dozen games published for the public. Another group of games only available through private publication. And many more in development.